​What shape are our human induced pluripotent stem cells?

Cell morphology in general, and cell shape in particular, provide a readout of organizational and physiological cell state. In evaluating cell health or state, we frequently make inferences from the outline and texture of the cell’s membrane. This is easy to do on a cell-by-cell basis but becomes substantially harder when confronted by a population of hundreds or thousands of cells.

One of the data products produced by the Allen Institute for Cell Science is a large corpus of segmented cell and nuclear shapes. These are a necessary step in the isolation of individual cells from our high-magnification fields of cells. These segmentations provide a simple way to characterize cell and nuclear shape, being nothing more than True/False (cell/not-cell or nucleus/not-nucleus) matrices.

We find that our cells have more variation in shape than might naively be assumed, requiring twenty components to capture half the shape variation, while nuclear shape is more stereotyped. The primary modes of variation for cell shape are how much of a waist a given cell has and how much it leans to the side or stands up straight. The primary modes of variation for nuclear shape are how much the nucleus presents as  pancaked/squashed or presents as cylindrical. To help build intuition about shape across our population, let's take a look at a decomposition that tells us mean shapes and breaks out shape variation along a couple of axes.

Dive in to the What shape are our hiPS Cells?​ Jupyter notebook

Code for setup
Let’s load our cells and nuclei.
You can get them here and here or wgetthem as described below.
Code to load the cells
​What do our cells look like?
We’ll need to define some plotting helper functions first and then we can plot our cells.
Code for plotting

Our cells look good in stripes! Also, it helps us see their contours.
So we’ve got a very nice number of cells loaded....

These capture a middle amount of the natural variation seen in the cell outlines. It is a fair bit easier to capture nuclear variance than to capture cell shape variance, likely because the nucleus is a more stereotyped shape.
​What do the principal components look like?
Let’s see how they are distributed by calculating them for a subset of the cells we trained on. Since the information content levels off and it would be cluttered to look at all 20 components, I’ll limit this to the first 6.
Code for visualization of principal components 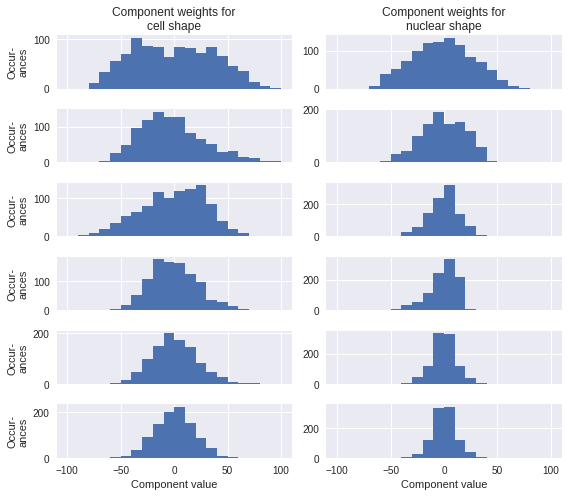 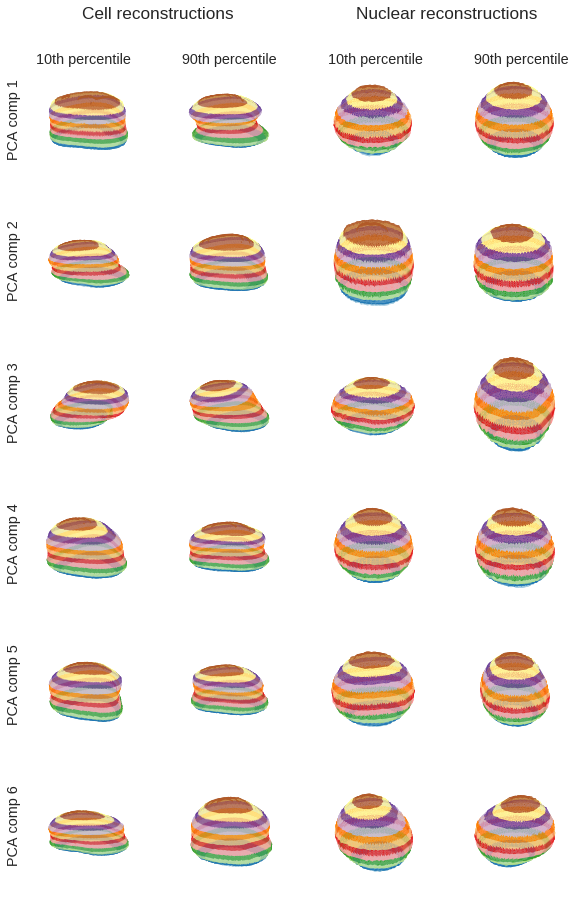