We chose spinning disk microscopy and robotics for sample preparation as the central part of the pipeline because it is optimized for:
To add more information to our data, we plan to build additional pipelines based on the Zeiss LSM 880 Airy fast, FCS, and image correlation techniques.

We visualize all structures with diffraction limited optical microscopy and collect four channels:

ROBOTICS
Cells are seeded and maintained on a Hamilton Microlab Star (Hamilton Company, Reno, NV, USA) robotic pipetting workstation equipped with:For most applications we use 1000μl or 500μl pipette tips. We typically aspirate at 250μl/s and dispense at 150μl/s. If not noted otherwise, all operations are conducted at room temperature.
96-WELL PLATES
For all imaging experiments we use 96-well glass-bottom plates (Cellvis, Mountain View, CA, # P96-1.5H-N):

CONTROLS
Each plate has the following controls: 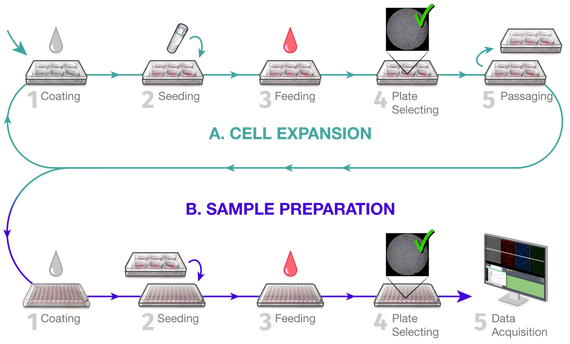 ROBOTICS
Cells are seeded and maintained on a Hamilton Microlab Star (Hamilton Company, Reno, NV, USA) robotic pipetting workstation equipped with:
For most applications we use 1000μl or 500μl pipette tips. We typically aspirate at 250μl/s and dispense at 150μl/s. If not noted otherwise, all operations are conducted at room temperature.

PIPELINE MICROSCOPES
For pipeline operation we use three spinning disk microscopes (Carl Zeiss Cell Observer SD):
ADDITIONAL MICROSCOPY
​We use additional widefield and confocal microscopes for R&D and assay development work. Some of them will be used in future imaging pipelines.
3x Carl Zeiss LSM 880 with FCS capability and Airy Detector fast.

WHAT MICROSCOPE TO USE?
The initial goals for the microscopy pipeline are:We focus on light microscopy modalities to visualize structures in live cells. We considered the following methods:
We decided on spinning disk microscopes as the central part of the pipeline. To add more information to our data, we plan to build additional pipelines based on the Zeiss LSM 880 Airy fast, FCS, and image correlation techniques
THE ROLE OF PINHOLE
When imaging thick samples like monolayers of hiPSC, with a wide-field microscope, the structures in focus are blurred by out-of-focus light. A confocal microscope overcomes this limitation by rejecting out-of-focus light with a pinhole in the image plane in front of the detector. In the classical point scanning implementation, the system scans a focused laser beam line by line over the sample and records one pixel at a time. This setup creates very high-quality images but is relatively slow
http://www.microscopyu.com/articles/confocal/confocalintrobasics.html
Spinning disk microscopes overcome the speed limitation by scanning multiple beams in parallel. The image quality is lower than for point scanning microscopes and the optical sectioning capability is limited to thinner samples. hiPSC are thin (20μm) enough not to suffer from this limitation.
In a spinning disk microscope, the sample is illuminated through pinhole arrays in a fast spinning disk (Nipkow Disk). This disk creates a pattern of spots sweeping over the sample. Fluorescence or reflected light from the sample is collected through the same pinholes providing optical sectioning.
Typical implementations are:We decided on a spinning disk with micro-lenses (Yokogawa CSU-X1)
https://www.leica-microsystems.com/science-lab/hyvolution-super-resolution-imaging-with-a-confocal-microscope/
Optical sectioning (black, solid line), lateral resolution (black, dashed line), and light collection efficiency (green line), all depend on the diameter of the pinhole. Smaller pinholes decrease the thickness of the optical section, thus increase the resolution of the system along the optical axis. Less pronounced is the increase of lateral resolution for smaller pinholes. Smaller pinholes reject more light and thus the collected image is dimmer.
The diameter of a pinhole is measured in Airy Units (AU) and depends on the wavelength λ of the illumination light and the numerical aperture NA of the objective:
\[1AU =  \frac{1.22\cdot \lambda }{NA} \]
For λ = 488nm (excitation for eGFP) and NA = 1.25 (high resolution water immersion objective) 1AU is 476nm. To calculate the physical dimension of the pinhole we multiply this value with the magnification of the optical system in front of the pinhole. E.g. a 1AU pinhole with a 100x Objective corresponds to a pinhole diameter of about 50µm.
For most applications, especially for live cell imaging, a pinhole diameter of 1AU is a good compromise between light efficiency and resolution. At one 1AU the system collects still 90% of the focal light intensity (see green curve) while the z-resolution does not increase significantly for a smaller pinhole.
Yokogawa manufactures two models of spinning disks with micro-lenses: After extensive testing we concluded that for hiPSC monolayers, the CSU-X1 is the better solution. Because of the higher pinhole density and faster rotation of the disk we achieve better signal-to-noise ratio for identical exposure times. We do not see crosstalk between the pinholes because hiPSC monolayer are thin enough. Our imaging focuses on single cells; thus, the field of view is not an issue.
Literature:
Hideo, H., et al. (2008). New Technologies for CSU-X1 Confocal Scanner Unit. Yokogawa Technical Report English Edition. 45.
Wilhelm, S., et al. Confocal Laser Scanning Microscopy: Principles, Carl Zeiss.
Nyquist
NYQUIST SAMPLING
The resolution of a camera based light microscope is limited by optical diffraction and the pixel size of the camera chip.
The optical resolution of a microscope is given by the wavelength λ of the light used and the numerical aperture NA of the objective. According to Rayleigh the resolution limit is
\[r_{Airy} = 0.61\frac{\lambda }{NA}​\]
For λ = 488nm (excitation for eGFP) and NA = 1.25 (high resolution water immersion objective), rAiry is about 240nm. Thus, the spinning disk microscope we use can distinguish two structures 240nm apart.
To be able to distinguish these structures in a microscope image, the pixel size of the camera needs to be small enough. In our system we use an objective with 100x magnification. Thus, two structures the optics of the microscope can just resolve, will appear 24μm (=240nm*100) apart on the camera chip. Each pixel on the chip we are using is 6.5µm x 6.5μm large and can very well resolve the structures.
A camera with such a small virtual pixel size collects only a few photons per pixel. The accuracy of each photon detector is limited by the fundamental quantum mechanical Poisson or statistical photon noise. The signal-to-noise ratio (SNR) for N photons counted is given by
\[SNR = \frac{N }{\sqrt{N}} = \sqrt{N}\]
Thus, images collected with cameras with larger pixels that receive more photons are less noisy.
Nyquist derived for non-periodic data that the sampling frequency should be at least 2.4x higher than the highest frequency in the data. For microscope images that translates into a pixel size that should be 2-3 times smaller than the optical resolution limit. To achieve this in our setup, we bin 2x2 pixels. This results in an effective pixel size of 13µm x 13µm. Using an additional 1.2x magnifier in front of the camera brings us very close to the Nyquist criterion while collecting sufficient photons to overcome Poisson noise. The camera has a similar resolution as the optical resolution of the system. If we use smaller pixels we will collect less photons per pixel and the signal will be noisier.
Literature:
Pawley, J. B. (2006). Handbook of Biological Confocal Microscopy. New York, Springer Science + Business Media. Chapters 1, 2, 4

CELLPROFILER
CellProfiler is an open-source platform for high-content image processing. It was developed by the Broad Institute and is available at http://cellprofiler.org/.
CellProfiler provides:
AIRFLOW
Airflow is a workflow management system. We use Airflow to combine processing modules written in Python, MatLab, and CellProfiler and to execute them on our in-house cluster.
Airflow is:Developed by AirBnB