Insights about hIPS cells & what we have learned by growing, manipulating & imaging them

Figure 1.
A. Representative examples of hiPS cells in seven stages of mitosis (M1-M7) and one category representing interphase (M0) categorized by shape and texture patterns of the DNA. Top row shows DNA and bottom row shows DNA and membrane.
B. Representative examples of hiPS cells expressing mEGFP-tagged alpha-tubulin in the same stages of mitosis as in A. Bottom row shows an illustration of mitosis stages as depicted in the listed reference.  For both A and B live hiPS cells were labeled with NucBlue Live (DNA; cyan; maximum intensity projection) and CellMask Deep Red (cell membrane; magenta; single slice near middle of the cell) and imaged on a spinning-disk confocal microscope. 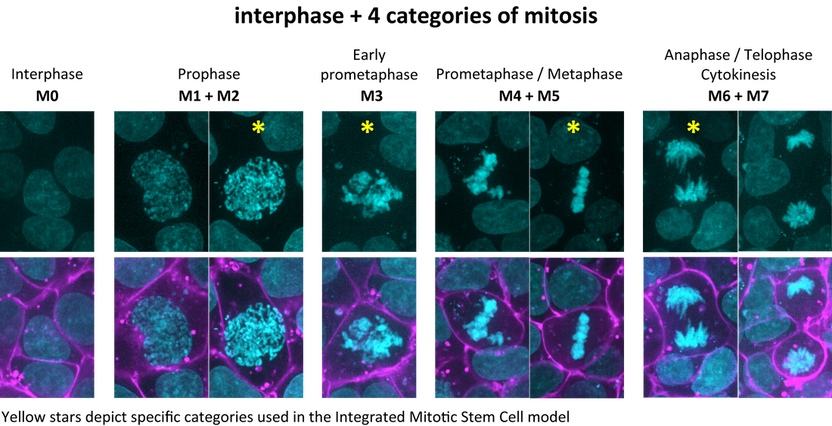 Figure 2. Representative examples of hiPS cells from Figure 1 to demonstrate the transformation of seven categories of mitosis into four​. These four categories plus interphase  were used to classify all available cells in the Allen Cell Collection. For the Integrated Mitotic Stem Cell Model, representative cells were selected at specific points within the range of each of the four stages, indicated with a star. For example, while prometaphase/metaphase (M4+M5) is one mitotic category, for the Integrated Mitotic Stem Cell model, only cells clearly at metaphase (M5) were used.
​Assigning mitotic cells to 4 mitotic categories
Mitotic cell datasets description
Automated alignment of cells
To align cells within each of the five cell cycle categories (four mitotic and one interphase), we created an automatic algorithm to identify 1) the translation needed to align the centroids of the DNA in three dimensions and 2) the two-dimensional rotation needed to align the cell within that stage of mitosis to a two-dimensional reference cell.

An integrated view of the cell at each stage of mitosis

​For each cell line and mitotic stage category, all assigned cells were examined for the location and morphology of the intracellular structure. One representative example of each is shown in Figure 3 below, as well as in the 3D Visual Summary tool. To simplify the presentation in the 3D Visual Summary tool, several of these mitotic categories were removed and the remaining categories were named after canonical mitotic stages. 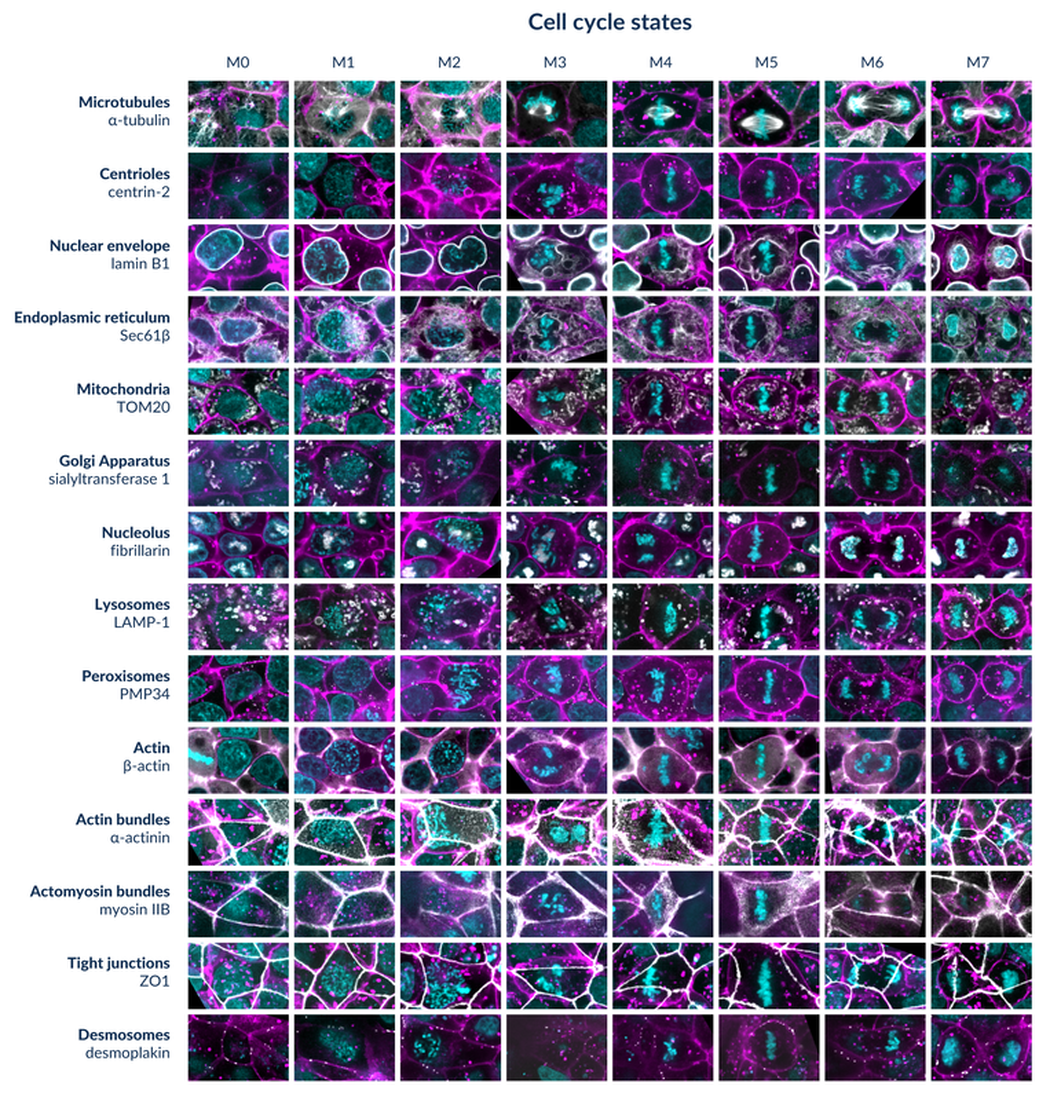 View these 96 images as Z-stack movies
Figure 3. Representative examples of hiPS cells expressing 14 different FP-tagged intracellular structures (listed on left, more information in the Cell Catalog) in seven stages of mitosis and one stage of interphase categorized by shape and texture patterns of the DNA. Live hiPS cells were labeled with NucBlue Live (DNA; cyan;) and CellMask Deep Red (cell membrane; magenta) and imaged on a spinning-disk confocal microscope. Cells were rotated to align the axis of cell division.
For any given structure, general changes in localization of the protein and the intracellular structure it represents can be followed through mitosis (Figure 3 left to right columns within one row). In addition, for any given mitotic stage, the combined set of structure localizations can be examined (Figure 3 all rows within one column), thereby creating an integrated view of the cell at each stage of mitosis.

Some interesting observations include: